Today is Mother’s Day and what better way to celebrate it than by featuring a woman who many wouldn’t consider a mother! They are sadly mistaken and her questionnaire proves it.

I am Tori McClellan and girlfriend of Matthew, Waylon’s daddy. We are planning to be married after I graduate next May! On February 5th, 2016 Waylon was born sleeping peacefully. It was so hard to say hello and goodbye all in the same night. When I woke up the next morning all I remember was begging to hold my son and [knowing] this was not possible. I still, 3 months later, struggle with this, every day and night (which I am sure anyone would, given the situation). Waylon was perfect in every single way in my eyes. 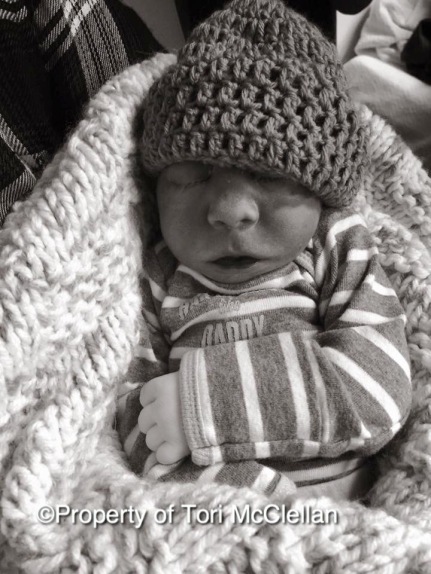 1. How long has it been since you gave birth/been diagnosed?
He turned 3 months old in heaven on May 5th.

2. How and during what stage of pregnancy was your child diagnosed? How did you react?
At 8 weeks, we had a panorama done to find out the gender sooner. With this came the bad news that something was off, they just weren’t sure what it was. On August 10th (15 weeks), we met with high risk to find out what was wrong. During the ultrasound I knew something did not look right, and that is when Waylon was diagnosed with Anencephaly.
I was absolutely devastated, all I could do was cry and cry. I was angry at everyone and could not understand why God would do this to me. All I could do was pray they were wrong, and I lived with this theory for months.

3. Do you know what caused the defect for your case?
We were told that this neural tube defect was caused from a folic acid deficiency.

4. Did you ever consider terminating? Why didn’t you?
Never once did I consider terminating. Our high risk told us the best thing to do was to schedule an appointment to have it done as soon as possible because he will not survive birth. We were also told that it was okay because he would not be able to feel any sort of pain. This made me so angry. I could not terminate my pregnancy based off of what I was told. Regardless, he is my child and I would have done anything if it meant keeping him here with us as long as we could.

5. Would you change anything about your experience?
Absolutely not. I was blessed with 41 weeks with my sweet boy and would do it all over again if I could.

6. What was your favorite moment while being pregnant?
Feeling him kick me in the ribs 90% of the day. This sounds crazy to most people, but I would do anything to feel that one more time no matter how uncomfortable it made me.

7. What was your favorite part of meeting your child?
The moment he was put into mine and his daddy’s arms. I have never felt so much love for one human being as I did at that moment.

8. Is there any special meaning behind your son/daughter’s name?
No, it was chosen before he was ever diagnosed because this was our most favored name.

9. If you could tell anyone anything about your child, what would it be?
He fought until he could not fight any longer. He is more than perfect in my eyes – the most handsome little red head I ever did see.

10. Birthdays!! How long did they live? Born sleeping?
He was born February 5, 2016 at 6:05 pm and had already passed by this time. He was born peacefully sleeping.

11. Do you belong to any support groups that have helped? Any that didn’t?
I joined the Anencephaly.info support group after having my Waylon this past February. Joy’s sweet momma added me, and I am so glad she did. I do not feel so alone anymore, as I once did.

12. What were your most effective coping mechanisms?
Anything that kept me on the go constantly. Working 40+ hours a week, taking trips that we called “Waylon’s first…”, listening to music, being around friends and family, and spending all my spare time with my boyfriend (Waylon’s daddy).

13. How did it affect your relationships; marriage, family and/or friends?
I have been blessed with a very supportive family, friends, and boyfriend. Nothing has been affected negatively by the loss of our son, we have all actually become much closer.

14. How do you want them to be remembered?
As the little boy who fought till the end. I do not want Waylon to be forgotten. Though he was born sleeping, he was still here for a short time and will always be my precious son.

15. What’s your favorite keepsake?
We have so many that it is hard to choose only one. 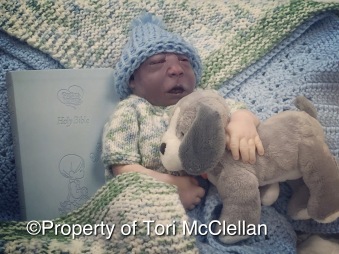 We have more than a thousand pictures, a lock of his hair, a canvas with his hand and feet prints, a drawer full of his things, two boxes full of stuff from the hospital, flowers we received from is funeral, and his little bible.

16. What do you want everyone to know about Anencephaly/Acrania?
This birth defect does exist and it can happen to anyone. Anyone trying to become pregnant needs to be aware, and take folic acid daily before ever trying to conceive. This was save you the heartache that I, along with many other mommas, endure every single day.

17. What dreams and hopes did you have for your child?
I dreamed of so many things while I was pregnant with my Waylon. I would have given my life up for his is it were possible. I always wondered “What would he be like one day”, “What would he go to college for”, “Who would he marry and how many children would he have”, but these dreams all came to an end. What I would do to do it all over again.

18. What kind of things did you do to bond with your child?
I talked to him before he was born and could not keep my hands off of my stomach. Every little kick, I had to hurry and put my hand up to get a better feel. Once he was born, I held his still body as close to me as I could and couldn’t stop kissing his little nose and forehead.

19. Did you have a baby shower or celebration of life? What was most exciting about it?
We had planned on it, but never were able to actually have one. It was between Thanksgiving and Christmas, so we chose to spend time with our families for the holidays instead of trying to get everyone together at a different time (which was very difficult because a lot of my family works graveyard).

20. Did you or do you have any other children? How has this loss affected them? Did they ask any questions? If so, what were they?
No, Waylon is my first child.

21. How do you incorporate your son/daughter into your lives and the lives of your family?
We got Waylon a dog to match his arrival outfit and we take it everywhere we go. We 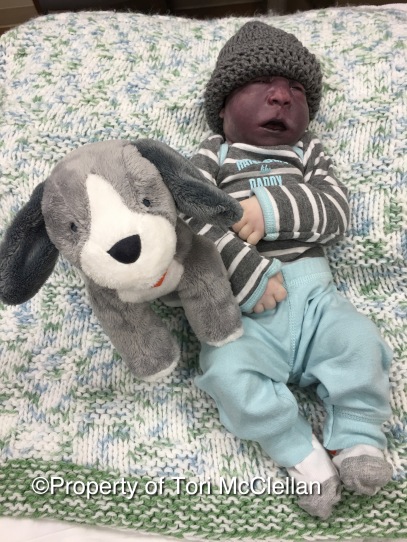 talk about him all the time, and include him in everything we do. Though he is not here with us, he will always be a part of our growing family.

22. Did you have twins? Were both Anencephalic? How did having twins change your bonding? How do you cope seeing one twin and not the other?
N/A

23. Were there any unhelpful comments made to you? If so, what were they?
When I was pregnant with Waylon, I had many people telling me to keep praying because God can heal him. I heard this from everyone, and wanted so bad to believe them. God can do miraculous things, but I knew he had a different purpose for Waylon. I would get so upset explaining this on a daily basis to the point to breaking down and crying. No one understood this was something that could not be healed.

24. In what way would you want to inform the world of your child or Anencephaly/Acrania?
I would want everyone to know this is your child, and God has given you this special little one according to his purpose. Choosing to carry your anencephalic angel is so rewarding in the end, as many of us mothers know. I want the world to know that I do have a son, and he is special in his own way. I was so down throughout my pregnancy due to his diagnosis, and I wouldn’t wish this on anyone. Throughout my journey, I know more than I did before beginning it. I would encourage anyone pregnant with an anencephalic child to enjoy their time with their angel and make the best out of it. Always stay positive because your child will love you more than you ever know for choosing life for them.

25. Do you run a blog, Facebook page or other support or organization? If so, what do you hope to accomplish with it and how has it benefited you? Links.
I do not, but I so badly wish I had started one when I first found out about my Waylon.

26. Were you able to keep your child with you after they passed? How long? What do you cherish the most about that time? i.e. their toes, eyelashes.
Waylon was born sleeping, but I was blessed to have spent about 8 hours with him. I cherished everything about those 8 hours with my baby. I was able to change his diaper, dress him, and take hundreds of pictures. Everything about him was so perfect to me. He looks just like his daddy; eyes, nose, hands, feet, everything about him. He had red hair, which I had predicted because his daddy has red facial hair – I had always wanted a little red head! 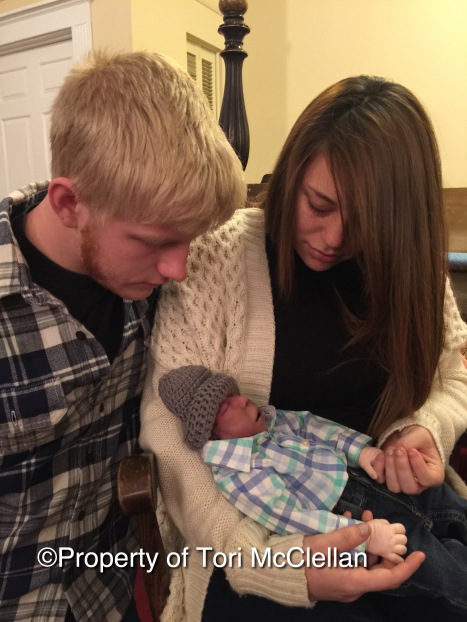 27. In what part of the world are you in? Have you met any other mother’s who’ve lost their child to this?
I live in the U.S. Kingsport, Tennessee. I have met one other mom (Joy’s momma). My aunt knows some of her husband’s family, and was telling me about her. She messaged me when she saw my little Waylon and was the one to inform me about the group anencephaly.info.

28. If you’ve lost more than one child to this, how did one experience change from the other?
N/A

30. Mother’s day is soon, how do you celebrate? Is it difficult for you and in what way?
This will be my first mother’s day, as I did not know last year that I was pregnant until after mother’s day. I am already having a difficult time knowing that it is soon. I will, however, be celebrating with family this year.

31. Have you published any news articles or gained media attention? If so, would you mind sharing your experience and links?
No, I have not.

32. Did you do neonatal donation? How has that helped you?
Waylon’s birth weight was too small.

33. Were you able to pump and donate your child’s milk? Why did you choose to donate or why not? How did it help you?
I had planned to pump and donate, however, this did not fall through as planned. I was supposed to have a pump sent to me and had talked to my doctor about it. No one ever got back in touch with either one of us so I was unable to. 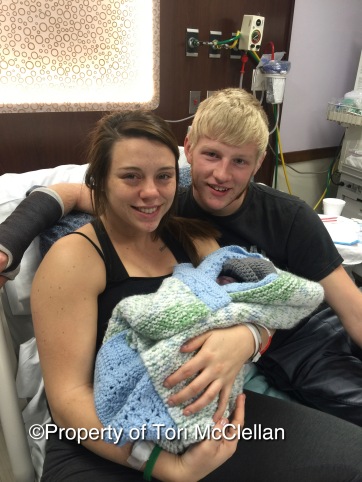 As you can see, Tori is a mother. She is a mother who grieves for her first born and does everything in her power to honor him and make sure people know his name. Waylon was a loved and wanted little boy and no one can take the title Mother from Tori. ❤