Today’s featured angelbaby in my month-long Anencephaly/Acrania Awareness segment is Temperance. Her mother, Alex, has already shown how truly special Temperance is to them in the short time she’s been gone. Alex was one of the first to jump on board to contribute to this project and I’m so incredibly thankful!

A little about Temperance’s family via her mother, Alex Bush:

Hello, I am Alex Bush, I’m wife to Matt and stay-at-home mum to Travis (6) and Saffron (3). We lost our 3rd baby to early miscarriage in Dec 2014, then Temperance, our 4th baby, was diagnosed with Anencephaly Sept 2015. I am a non-practising Catholic while my husband is of no fixed religion. Temperance was born sleeping on Monday 11th April 2016 at 1.50am. She is perfect and beautiful, she is ours and she is so loved.

1. How long has it been since you gave birth/been diagnosed?
I gave birth to baby Temperance on 11th April 2016, so 18 days ago.

2. How and during what stage of pregnancy was your child diagnosed? How did you react?
Temperance was diagnosed at our first ultrasound scan at 11 weeks 4 days. I was completely distraught and could barely stand, I just cried and cried. I then felt numb. My husband had to go back to work while my friend took me and Saffron home before picking Travis up from school. It was a Thursday and we had to wait till the Monday after to see a midwife and consultant. It was a long weekend.

3. Do you know what caused the defect for your case?
We haven’t had any testing but I wasn’t using Folic Acid so that probably was a major factor.

4. Did you ever consider terminating? Why didn’t you?
We did consider it (against all my beliefs) as I was in shock and thought it would be better for our children to not prolong it but within one week I knew it was the wrong choice. Temperance is my daughter and she deserved every chance of life and I had to protect her.

5. Were there any unhelpful comments made to you? If so, what were they?
Not really. Our consultant was probably the most unhelpful, repeatedly being very negative and not supporting our choice to continue.

6. Would you change anything about your experience?
No, I don’t regret anything and am so grateful for the little time we had with her and sharing her with our families.

7. What was your favorite moment while being pregnant?
A photo shoot with our families and involving our children in Temperance’s life.

8. What was your favorite part of meeting your child?
Seeing her beautiful face, dressing her and seeing our Children’s love for her.

9. Is there any special meaning behind your son/daughter’s name?
A baby after loss is known as a rainbow, so after we lost our Angelbean to early

miscarriage, Temperance was our rainbow. But as she has her own condition we called her our stormy rainbow. We had been looking for names in connection with that theme and another lovely Anencephaly mama suggested Tempest and we looked at different versions. We are both massive Bones fans and both suggested Temperance at the same time. It means balance, moderation and is a virtue name and gives me such calm.

10. If you could tell anyone anything about your child, what would it be?
She is ours and she is beautiful.

12. Do you belong to any support groups that have helped? Any that didn’t?
I am part of the fabulous Anencephaly.info support group and they are amazing. I also have support from my Uncons and EACH.

13. What were your most effective coping mechanisms?
Being with my children seems to help the most, but it is very early days still.

14. How did it affect your relationships; marriage, family and/or friends?
It is very early days, but our families have been amazing. My marriage seems stronger than ever. Friendships on the other hand… well, you certainly find out who truly is there for you.

15. How do you want them to be remembered?
I want her remembered as a very loved little girl who is a baby sister 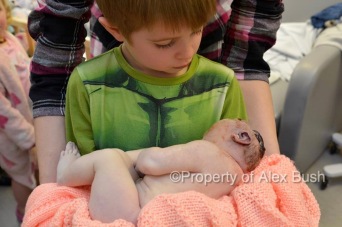 16. What’s your favorite keepsake?
I have too many to choose from!!! So many photos, handprint and footprint plates and casts, a hair lock, clothing, blankets, candles, even her flowers and grave. I guess my most treasured keepsake is her memory in my heart.

17. What do you want everyone to know about Anencephaly/Acrania? 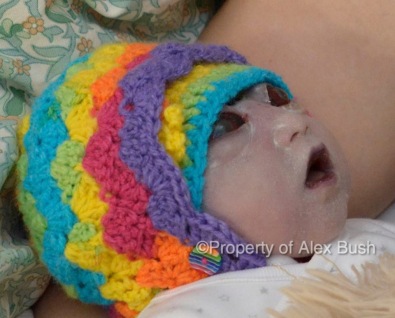 Every baby is perfect and beautiful.

18. What dreams and hopes did you have for your child?
I don’t really know, just that they are loved and happy, what else matters?!

19. What kind of things did you do to bond with your child?
We went to a 4D scan, we had heartbeat bears made, I talked to her and sang songs with my children to her. Laid feeling her every move.

20. Did you have a baby shower or celebration of life? What was most exciting about it?
Yes I did, only a small one as it was difficult to find time with my friends. Just being with people who love us.

21. How do you celebrate your child’s birthday?
I haven’t celebrated her birthday yet, but I hope we can visit her resting place and spend the day with family like any other birthday, love and laughter.

22. How do you incorporate your son/daughter into your lives and the lives of your family?
Temperance is in everything we do, we talk about her all the time. She will always be apart of our family and we won’t hide her.

23. Were you able to keep your child with you after they passed? How long? What do you cherish the most about that time? i.e. their toes, eyelashes.
Temperance was born at 1.50am. By 2.10 our children, parents, and sisters were with us and we had photos and swapped presents, blessed her, and got her weighed, washed and dressed. Everyone went home by 7am and my husband and I stayed with Temperance in hospital till 7pm.
Her fingers, her toes, her lovely soft skin, her beautiful rosebud lips, every part of her.

24. Did you have twins? Were both Anencephalic? How did having twins change your bonding? How do you cope seeing one twin and not the other?
N/A

25. If you’ve lost more than one child to this, how did one experience change from the other?
N/A

26. Did you or do you have any other children? How has this loss affected them? Did they ask any questions? If so, what were they?
We have a 6yr old son and a 3 yr old daughter. Saffron hasn’t really understood much as she is very young and very matter-of-fact about it all. Travis has been amazing, he is a very sensitive emotional little boy who really thinks about everything. He has asked lots of questions about why she couldn’t come home and why the Drs couldn’t “fix” her, why she couldn’t stay inside me and where she would go.

27. In what part of the world are you in? Have you met any other mother’s who’ve lost their child to this?
We are in the UK, Norfolk… I haven’t met anyone, but I am in contact with another mum who I hope to meet soon.

28. Mother’s day is soon, how do you celebrate? Is it difficult for you and in what way?
In the UK, Mother’s Day is in March so I was pregnant at the time. I had a good cry, then tried to be grateful for what I do have. My lost babies will never be forgotten but I am also lucky to have two sunshine earth children.

29. In what way would you want to inform the world of your child or Anencephaly/Acrania?
In any positive way possible. I want everyone to know about her.

30. Have you published any news articles or gained media attention? If so, would you mind sharing your experience and links?
Our story was on our local radio station and on our photographer’s blog.

31. Did you do neonatal donation? How has that helped you?
We wanted to but were turned down.

32. Were you able to pump and donate your child’s milk? Why did you chose to donate or why not? How did it help you?
I am one of the few who does not produce breast milk unfortunately and I have been battling my own demons surrounding this as I am a big supporter of breastfeeding and milk donation.

33. Do you run a blog, Facebook page or other support or organization? If so, what do you hope to accomplish with it and how has it benefited you? Links?
I have a Facebook page about our journey so far: Our Stormy Rainbow, Temperance, and our Journey with Anencephaly. I just want to raise awareness of Anencephaly, of Angel babies/infant loss and of folic acid. I feel it has benefited me by allowing me to release some feelings and letting others show their support for us.

Isn’t she amazing? I love, love, love how she includes folic acid and folate (the natural version of folic acid) in her awareness campaign. Many people don’t understand how essential it is and how little we actually receive unless we’re on a prenatal or eating large quantities of folate packed food. i.e spinach, kale, broccoli or even chickpeas.

After researching the Go Folic! advertisement, I realized it’s a huge undertaking in the UK. It makes me realize I need to research to see what’s in other countries, not just my own. It’s show that if all women of child-bearing age took 0.4mg of Folic Acid every day before and at least until the end of the first term of their pregnancy, between 50 and 70% of potential cases of Anencephaly and Spina Bifida could be prevented. For those who’ve already had a baby with a Neural Tube Defect(NTD), it’s been recommended to take 0.8mg to decrease your chance of another pregnancy with an NTD.

Also, their slogan is extremely catchy and makes me laugh. 🙂

Alex’s dedication to Anencephaly and folic acid awareness is something I hope to impress on others. If something as simple as taking a prenatal or folic acid supplement every day can prevent another family from experiencing loss, why not spread awareness of it? Thank you, Alex, for sharing your story and Temperance’s story with us. You both are truly remarkable.

The lady who took them is Theresa McGrath and she runs Theresa’s Tiny Treasures. except the ones with her in a white sleepsuit with rainbow hat/booties, there are 5 of those, which I took, my name is fine smile emoticon x Thank you so much xx

Mora Caroline, a fellow mother who has experienced loss, has graciously agreed to translate all of the segments into Spanish. Our hope is to provide more resources for those who don’t read English well or at all. She and I agree that there are many families out there who are isolated due to a language barrier. By translating, we’re hoping to inspire others to go bilingual; to open their blogs, posts and general information on Anencephaly and Acrania to the Hispanic community. Thank you, Mora.

P.S. As of right now the graphics are only in English, sorry.

There was an error retrieving images from Instagram. An attempt will be remade in a few minutes.